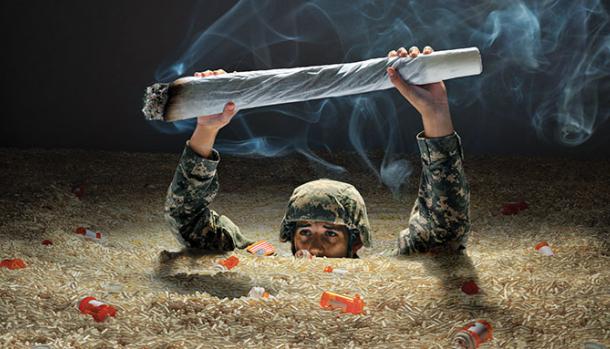 The event began with Dr. Martin discussing his 45 years of scholarship on topics of drug policy, religion, and American social issues, and his belief that, “many of the problems that arise that we talk about in relation to drug use are caused by prohibition.”

Regarding veterans, Martin explained that Texas is home to 1.6 million veterans, about half of which served in Iraq or Afghanistan. Statistics suggest 20% of Iraq and Afghanistan veterans have recent symptoms of PTSD and Vietnam veterans have a higher reported rate of recent PTSD symptoms (about 4 in 5 with symptoms). PTSD is currently treated with prescription drugs that turn patients into zombies, or lead to suicidal thoughts, anxiety, abnormal dreams, decreased libido, and impotence. Rather than medical marijuana being a gateway drug to veterans, it is an exit drug. It helps veterans and other patients decouple from their prescription drug addictions (often combined, David Bass explained, by alcohol addictions).

In all of Martin’s work interviewing veterans with PTSD, he said starkly, “not one hasn’t seriously considered suicide.”

Next to speak on the panel was Dr. Neeraj Shah. Dr. Shah is currently an emergency doctor, previously a doctor of internal medicine, and has extensive experience in VA centers throughout Texas. He testified in front of the Texas House’s Public Health Committee in 2013 in favor of amending the Texas Penal Code to include an affirmative defense. This bill would have required an acquittal for marijuana possession under one ounce if the defendant can show legitimate medical use.

He echoed the concern of Martin about PTSD and suicide, and wondered why such high doses of dangerous prescription drugs—quantities that can lead to a lethal overdose—are doled out to patients with a high risk of suicide. Marijuana, on the other hand, accounts for zero recorded overdose deaths and has been in use as medicine for over 4,000 years.

Do the pills work? Shah stated that, “one-third of patients are still symptomatic after ten years.”

What is the reason for marijuana being singled out as the end-all, be-all dangerous drug? That is what the federal government would want you to believe with its Schedule 1 status. But, in my opinion, the refusal of the DEA and Congress to change the Schedule 1 status of marijuana is the government’s reaction to being totally wrong on an issue. Heaven forbid the government look silly on a topic and admit they were wrong.

Next on the panel we have Maj. (Ret.) David Bass, Texas NORML’s Veteran’s Liaison. He served for 21 years in the Army, toured during Desert Storm and Operation Iraqi Freedom, and told the audience he never predicted he’d be the type who would have PTSD. He only determined to tell his doctor about his PTSD when he retired. He believes also, “many, many soldiers will not seek treatment for PTSD because they think—rightly—that their career will be affected.”

He concurred with Dr. Shah that veterans are prescribed way too many pills and added that there is a culture of drinking in the Army that leads to serious addictions. For him, marijuana was an exit drug. He became more emotional and ended with, “I was already addicted to drugs—legal drugs. Cannabis was an exit drug for me. It saved me.”

State Senator Joan Huffman was next asked what was the outlook for a medical marijuana measure in the 2015 session of the state legislature. She believes there is bipartisan support for a policy change from the public, but countered that by saying “I don’t think from my discussions with leadership that anything’s going to happen anytime soon.”

Huffman said even the Governor of Colorado had warned other states not to legalize and questioned how Texas could practically implement a medical marijuana program while keeping it from those who would use the drug recreationally. Can it be regulated like alcohol? Huffman believes we don’t do a successful job at keeping alcohol away from kids. She welcomes more open research of marijuana’s benefits.

Unfortunately, prohibition has failed at its goal to keep kids from accessing drugs. 44% of high schoolers report knowing someone at their school that sells drugs.

Unless politicians can be convinced a medical marijuana program is not a slippery slope to legalization, patients’ concerns will be addressed simply with, ‘there are plenty of other treatments, why would you possibly demand the best one?’

RAMP co-founder and executive director Ann Lee asked the panel, “Can any of you tell me why marijuana is illegal?…You’re paying homage to a bad law.” And she emphasized medicine and recreational use should be a freedom issue that small-government conservatives defend.

Bad law indeed, and one it seems the legislature is clinging to. As Dr. Shah emphasized, “This argument that there’s not enough evidence is not true…Every day that we waste arguing about this, how many veterans are dying?”

Watch the full video from the event.