Efforts in Your State 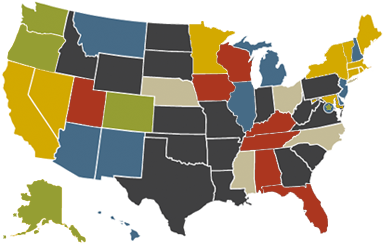 In November 2014, Oregon, Alaska, and the District of Columbia joined Colorado and Washington to abolish marijuana prohibition within their borders. Though opponents of sensible marijuana policy use extreme rhetoric to maintain the status quo, there is no greater evidence than the success of Colorado to defeat the arguments for prohibition. With each state, recognizing that legal marijuana encompasses about 18 million Americans now, it becomes clearer that we will soon rid ourselves of the failed policy of marijuana prohibition.

Legal sales of marijuana have not resulted in overdoses or a spiraling increase in the sales of other illegal drugs. Rather, cannabis store owners saw orderly lines and a successful tax collection for the state of Colorado. Activists and legislators are taking note, and Tax & Regulate reforms are being actively sought in the following states:

Another important step to free-up law enforcement resources for the pursuit of crimes with victims is the decriminalization of possession of small amounts (typically less than 1 ounce) of marijuana. Decriminalization would treat marijuana possession as a civil infraction similar to a speeding ticket. Though the Drug Enforcement Agency and law enforcement representatives claim to target dealers and high-level offenders in the war on drugs, 88% of marijuana arrests in 2012 were for mere possession. The arrest process is extremely taxing on both law enforcement officers and defendants. It can mean loss of work, time away from the family, loss of benefits, and a criminal stigma that follows someone throughout their lives. This is not even touching on a full conviction and lengthy sentence behind bars for simple possession. Arrests for marijuana possession are also decidedly racially biased and serve to distance minority communities from their local police. 17 states and Washington D.C. have passed decriminalization measures and more are to follow. States with recent and continuing efforts to decriminalize marijuana possession include: