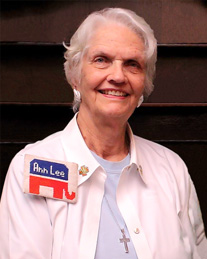 Republicans Against Marijuana Prohibition Founder Ann Lee is a lifelong Republican. In 1990, after a workplace accident that put her 28 year old son, Richard, in a wheelchair as a paraplegic, he stumbled upon research that showed marijuana as a possible relief for his severe nerve pain. Though Ann once believed marijuana to be a dangerous “gateway” drug, she recognized the very real medical benefit that cannabis offered her son. Believing Richard and after a lot of research, Ann and Bob Lee began to question the illegality of marijuana and came to the conclusion that the plant was good medicine and ought to be legal.

For over 15 years, Richard Lee has used marijuana responsibly, built several businesses, and been called a prominent citizen of Oakland, California by a member of Oakland’s city council. Richard’s medical use led Ann to activism on the issue.

It wasn’t until a NORML (National Organization for the Reform of Marijuana Laws) National Conference in Los Angeles in October 2012 that RAMP was conceived. Ann was asked to fill in on a panel, and it was discovered that three of the five panel members were Republicans. The Lees have long believed that prohibition is in direct opposition to the basic Republican policies of smaller government, fiscal responsibility, and less intrusion in your personal life.

In June of 2010, Ann worked in California in support of Prop 19, which would tax and regulate marijuana like alcohol. In an interview to the Oakland Tribune, Ann is quoted as saying, “The Drug War is so bad, it’s the most racist thing we’ve done since Jim Crow.”

Help bring the Republican Party back to the ideals of freedom and justice that were unfortunately set aside in support of prohibition. Join RAMP’s efforts by becoming a member.