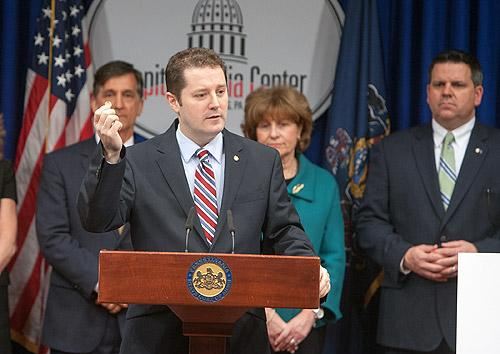 Pennsylvania State Representative Jim Cox (R) has joined the growing list of co-sponsors in support of a bill to allow safe access to medical marijuana. House Bill 1181 titled “Governor Raymond P. Shafer Compassionate Use Medical Marijuana Act” would authorize medical marijuana dispensaries and allow patients to grow up to six marijuana plants and possess up to one ounce of usable marijuana. Patients with a defined debilitating medical condition or a condition that currently has no superior alternative prescription treatment, as recognized by licensed medical authorities, would be allowed access. These include cancer, glaucoma, HIV/AIDS, epilepsy, multiple sclerosis, and Crohn’s disease, among others.

Representative Jim Cox appears to be following in the footsteps of former Pennsylvania Governor Raymond P. Shafer (R), whose name prefaces the legislation, in his support for reforming marijuana laws. In drafting the Controlled Substances Act of 1970, marijuana was temporarily classified as a Schedule I substance by the Nixon Administration—the most dangerous classification alongside heroin and LSD—pending a report from the National Commission on Marijuana and Drug Abuse. Governor Shafer was appointed by President Nixon as Chairman of the commission, and on March 22, 1972, dismayed the administration by delivering a report entitled “Marihuana, A Signal of Misunderstanding.” Shafer urged the end of federal marijuana prohibition with the final thesis: “Looking only at the effects on the individual, there is little proven danger of physical or psychological harm from the experimental or intermittent use of the natural preparations of cannabis.”

If Pennsylvania’s HB 1181 were to pass, patient’s medicine would be subject to existing state and local sales taxes. Driving a motor vehicle and public use of marijuana at parks, beaches and places where cigarettes are outlawed would remain illegal. The Department of Health of the Commonwealth would maintain a confidential list of patients to whom it has issued registry cards. Individual names and other identifying information would be confidential and not considered a public record under Pennsylvania’s Right-To-Know Law. Schools and landlords would not be allowed to discriminate against medical marijuana patients unless they were to subject the landlord to a loss of monetary or licensing benefits under Federal law.

It takes courage to separate oneself from the pack, and Representative Cox has shown bold leadership as a compassionate Republican on the issue of medical marijuana. More conservatives should stand with him and demand action on the reform of marijuana prohibition. This should be an easy area for bipartisan agreement, but many mainstream Republicans are resisting change and embracing outdated ideology. Republicans should unite nationwide to end the outright ban of marijuana and take control of this issue. We can begin by thanking and supporting Representative Cox and relentlessly encourage other politicians to follow his lead. Unfortunately Pennsylvania’s current Republican Governor Tom Corbett has already stated his intent to veto the legislation if it were to make it to his desk. House Bill 1181 is currently pending in the House Health Committee, and a hearing has not yet been scheduled since its introduction in April 2013.