The Republican Party brands itself as representative of the grassroots, transparent, and in favor of limited government. Unfortunately, the Republican Party of Texas (RPT) failed to adhere to these standards with its recent rejection of Republicans Against Marijuana Prohibition’s booth at our state party convention in May.

RAMP is led by dedicated and proven Republican activists. Our Executive Director is Ann Lee, a warrior for the conservative cause who has worked tirelessly for our candidates as a precinct chair for over forty years. John Baucum, our Political Director, is the Chairman of the Texas Young Republicans and former President of the Houston chapter. And RAMP’s Treasurer Bonnie Lugo sits on the State Republican Executive Committee.

Lugo and other SREC members who serve on the Officials Committee, the body responsible for reviewing questionable booth applications, held their meeting in Executive Session, requiring them to be bound by silence and prohibited from discussing the proceedings. This is an abuse of power, and signals to Republican activists that our hard work can be thrown to the wayside based on the whims of a select few, none of whom can be held accountable.

As of this writing, RAMP members have been given no explanation as to why the Officials Committee denied our request. According to the application guidelines, we appear to fit the criteria for a GOP group that should be welcomed with open arms. RPT has publicly posted that for an organization to be accepted as an exhibitor, they must not violate any of the eleven principles on the first page of the RPT platform. RAMP does not.

Furthermore, there’s been plenty of intellectual diversity within the GOP on display at the Texas Republican State Convention in the past. For example, the RPT consistently grants booth space to groups promoting opposite sides of the immigration debate. Allowed, too, have been lobbyists. We agree with this kind of inclusive representation. These are the debates we should welcome, not stifle. But when it comes to RAMP, the RPT has arbitrarily denied us the right to represent our many Republican members.

Why does a small and secretive faction of the RPT get to behave like judge, jury, and executioner? Why is there such resistance to diverse opinions that instead of allowing open debate, one committee that refuses to make its deliberations public is allowed to rule over the many? A lack of transparency undermines accountability and violates Republican values.

The fact is, RAMP’s objective of decriminalizing marijuana use is a commonly held view. 53% of Americans support legalizing the recreational use of marijuana. And 63% of Millennial Republicans are united against marijuana prohibition overall. In fact, this view is supported in Texas, as well. According to a survey conducted by the Texas Young Republicans, over 75% of the group’s members support replacing arrests for small amounts of marijuana possession with a citation. As far as medical marijuana goes, a majority of Americans support it as well. RAMP is not outside of the mainstream. 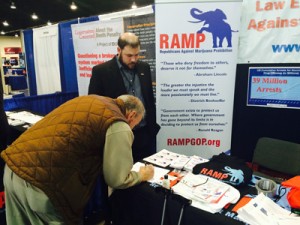 What RPT has done by denying RAMP representation at our party’s state convention is nothing short of arbitrary censorship. This secretive and hypocritical behavior, coupled with the mistreatment of dedicated Republican activists who support RAMP’s objectives, has created an environment that will derail our shared objective of electing conservative candidates.

Is this the future we want for our Republican Party? RAMP’s members are of the belief that if you disagree with a view held by a significant portion of the Republican base, civil debates on the matter should be held. Resorting to suppression is a sign of intellectual weakness.

If the Republican Party is to thrive both in Texas and nationally, it must stop eating its young, and treating hard working activists as useless, simply because members of a backroom committee disagree with them on one issue. This act by the RPT signals that a significant portion of Republicans, including the vast majority of Republicans under 40, are not welcome or valued—even if we agree with 99% of what happens to be in the ever changing Republican Party of Texas platform.

RAMP members are calling upon the Republican Party of Texas to approve RAMP’s booth or provide an explanation of how our organization fails to meet the publicly stated criteria for acceptance. Secret deliberative bodies that are unaccountable to the people are for Democrats. Republicans expect better from our leaders.

If the Officials Committee continues its practice of unaccountable censorship, we will not be able to grow as a party. Intellectual diversity is a cornerstone of conservatism and should not be feared. We await the RPT providing RAMP with an explanation of how our objective violates the standards of a Republican organization so egregiously that we are not allowed to participate as equals at our state convention.

Approval guidelines should be uniformly applied to all groups. With a public eye on the criteria RPT used to discriminate against a committed, active, and growing Republican group, we hope they will reconsider this breach of trust and restore RAMP’s right to man our convention booth. RAMP members deserve the right to participate in the exhibit area, and should be allowed to make our information available to all who are interested. Anything short of this is an insult to the Republican values we all share.