In a hasty vote, Texas lawmakers show their (lack of) appetite for marijuana research

On a bill that passed the House of Representatives by a margin of 135 to 8 to study “the benefits of providing integrated care to veterans with post-traumatic stress disorder,” few Texas Republicans would accept the premise of including marijuana as part of the study’s scope.

A stream of Texas veterans has been pounding the halls of the Texas Capitol since January, and for several sessions prior, telling legislators they currently use marijuana to help with the symptoms of PTSD, brain injuries, and pain. The response from legislators? Come back next year. We need to study it.

Well, the opportunity was lost when 81 members voted down an amendment put forward by Rep. David Simpson (R-Longview) on House Bill 3404 on Monday, May 11. The amendment simply added marijuana to the list of treatment options to be studied for PTSD.

Watch the video of the exchange on the House floor, beginning at 3:47:50.

After Simpson presented the amendment and engaged in some hushed conversation with HB3404 author, Rep. Senfronia Thompson (D-Houston), Representative Jeff Leach (R-Plano) hopped on the mic with, “Mr. Speaker, what just happened?” And he began to question if taxpayers were going to foot the bill for marijuana research. While Rep. Leach is comfortable using taxpayer money to study:

…he was not quite comfortable with “(3) using marijuana as a treatment for post-traumatic stress disorder.”

It is obvious Texas veterans are already using marijuana. Wouldn’t you want to know what research is out there?

Rep. Leach asked if the study would be a clinical trial or peer reviewed, showing his misunderstanding of the amendment as well as the original bill. No marijuana was to be administered to veterans, which would be the case if a clinical trial were performed.

In fact, if you want to know about the only FDA-approved clinical trial testing the safety and efficacy of marijuana for PTSD, you’re going to have to wait a little longer. The study’s leads, including Dr. Sue Sisley of Arizona, were recently featured on CNN’s documentary WEED 3 after being prevented for five years by federal red tape to progress with their research of a plant that has caused zero recorded overdose deaths. RAMP extends an open offer to Representative Leach to meet Dr. Sisley either over the phone or in Arizona, where 70,000 people access medical marijuana, including veterans for PTSD. Might offer something for Texas to study.

Rep. Jason Isaac (R-Dripping Springs) took to the mic in defense of the amendment saying the “federal government limits studies to only those that are negative” when approving marijuana research. He said marijuana’s beneficial effect on epilepsy and PTSD is “something I hadn’t heard of until about 5 or 6 months ago when I had parents of children with epilepsy in the district that I serve educate me on this. It’s something that I think we actually need to study and look at if we’re going to truly serve our veterans in this state.”

Rep. Ed Thompson (R-Pearland) also spoke against the bill, starting off with, “Ya know, I really don’t know that much about this.” (Hence the study.)

He went on, “Has the federal government done any sort of study on this through the Veterans Administration? … Why would we, when we talk about the border and we talk about how the federal government has not lived up to what they should be doing on the border, and the expense that we’re putting our taxpayers under here in Texas, and now we want to add another thing to that?”

To answer Rep. Thompson, no, the VA has not studied marijuana because the federal government defines marijuana as a Schedule 1 controlled substance, having “no currently accepted medical use in the United States.” In this case, the federal government has gotten it wrong – kind of the same way they have fallen down on border security. Which is kind of the reason for HB3404, a bill that received Rep. Thompson’s favorable vote.

I guess the thought of a kid rolling up a study about marijuana and smoking it was too scary for many Texas Republicans. Better to let veterans experiment with illegal marijuana for their PTSD without gaining official knowledge about the benefits or consequences.

There are other consequences to this vote. With 81 against, the Calendars Committee was leery of letting another marijuana bill take up precious time on a bloated schedule. House Bill 507, creating a civil penalty for one ounce or less of marijuana, was left pending in Calendars. With that, Texas is on deck to spend approximately $500 million in law enforcement and court resources arresting about 100,000 people for less than an ounce of pot. Luckily, three of the largest cities in Texas already think arresting marijuana users is too expensive for the public safety benefit and have diverted marijuana users away from jail cells. By pressing our local officials, we can set the stage for a powerful 2017 legislative session.

Here are the Texas Republicans we have to thank for their common sense approach to studying what other states are doing about PTSD and marijuana:

Here are the Texas Republicans who opposed a study:

At the time of writing, House Bill 892 is on the schedule, but has yet to be considered on the House floor. RAMP fully supports this bill, which would allow access to low-THC marijuana oil to patients with intractable epilepsy. The bill passed the Senate 26-5 and is likely, in our opinion, to also receive a warm reception in the House and be signed into law by Governor Abbott. Rep. Stephanie Klick (R-Fort Worth), author of the low-THC oil bill, voted against the Simpson amendment to HB 3404, but she also voted against HB 3404 altogether.

Update: HB 892 was not heard before the House deadline, but the Senate companion, SB 339, passed the House and is on its way to Governor Abbott’s desk. 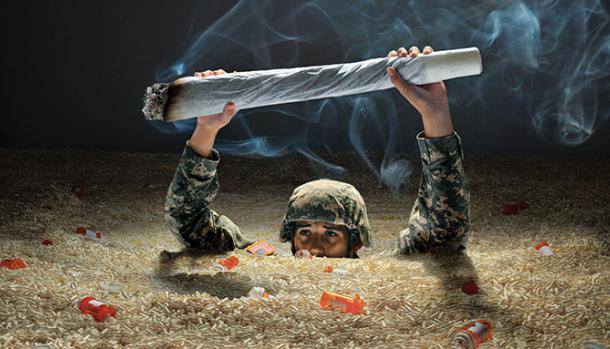