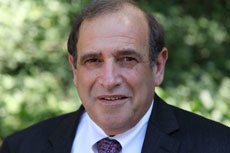 Ron Gold, the Republican candidate for Attorney General in California, answered several questions about marijuana legalization in an interview with RAMP. His Democratic opponent, Attorney General Kamala Harris, did not support Prop 19, the 2010 effort to legalize recreational marijuana in California that narrowly lost. Brian Brokaw, a spokesman for Harris told KCRA in August, “She believes that this is an evolving issue that requires that we monitor what is happening in Colorado and other states, and that ultimately, this should be up to a vote of the people.”

Gold, on the other hand, supports marijuana legalization and has outlined some steps in the interview below that he would pursue as Attorney General.

RAMP: Why do you think marijuana prohibition is not in line with conservative principles?

RAMP: What are the complexities California has had to deal with since the 1996 medical marijuana initiative? There seems to be a gray area in the law.

Gold: It is a black and white area with regards to the federal government, state government, and the 10th Amendment. Obama, through his DEA, is enforcing the federal law of prohibition. Meanwhile, California and other state laws have progressively gone toward medicinal marijuana. California has not approached recreational marijuana like it needs to. It is shocking to see the federal government in action, like with Dr. Fry who is spending time in prison for prescribing marijuana. We have a petition on www.rongold.org to pardon her. Our opponent decided not to help her. The complexity arises because an old fashioned concept like prohibition implies marijuana should be restricted because it’s sinful. We will overcome this mindset with libertarian concepts and freedom of choice.

RAMP: Did you always support marijuana legalization or have you adopted that position over time?

Gold: This is something that I have long held beliefs on. Fortunately, early in my legal career, I worked with John J. Murphy Jr., a former FBI agent. Over 45 years ago, we discussed that even FBI agents and most cops knew this was a farce. It made no sense to take law enforcement resources from hard crimes like rape and murder for marijuana enforcement. In the last month, our campaign recognized the 100th anniversary of the first person to be convicted for marijuana, which occurred in Los Angeles. I’ve known for the last 45 years that marijuana needs to be legalized for both medical and recreational uses.

RAMP: What would you, as Attorney General, be able to do to correct the current structure of California marijuana laws?

Gold: In 2016 there will be an initiative to legalize marijuana. I wouldn’t wait for an initiative. When I am elected, I will call in experts in the field, of which I’ve already contacted a number. We’d recommended legislation. We will also create guidance for regulation. There’s no purpose in waiting for 2016. We’ve waited 100 years for marijuana reform. Serious reform requires serious action.

RAMP: What are your opinions of the federal government’s actions in California? It seems the Feds take a harder stance against California growers, distributors, and patients than in other states.

Gold: That’s a really interesting point. On one side, you have a Republican potential Attorney General who supports recreational legalization. Then you have a Democratic Party, whose state platform supports recreational marijuana legalization. And yet, you have two or three obstinate politicians like Kamala Harris and Barbara Boxer, who resist. The federal government has been friendly with the current administration in California, and yet the California lawmakers seem not to have made any progress in the last 4 years with the federal government respecting our state laws. Even though my opponent went to the marijuana community in 2010 saying she would work to clear up regulations for the industry, 4 years have gone by and she’s sat at her desk.