Mitch McConnell weighs in on marijuana legalization in Senate race

Senator Mitch McConnell addressed marijuana legalization in his race for reelection to his long-held Senate seat in Kentucky. 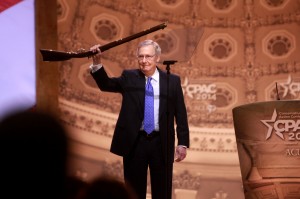 McConnell argued that ending federal marijuana prohibition would be akin to “giving up.” He told WVLK radio in Lexington, Kentucky, as reported by Roll Call, “I’m against legalizing marijuana. Certainly it’s not in the same category as heroin, but I think to begin…to sort of send the message that we’re giving up, you know, that this is just the way it’s going to be, then one thing leads to another and pretty soon…you completely transform your society in a way that I think certainly most Kentuckians would not agree with.”

It’s interesting that McConnell does not see that prohibition has been the policy this country – and the globe – has defaulted to. Prohibition has transformed our society in a way more and more people do not agree with, from no-knock SWAT raids to the small town with military-grade armored vehicles. Prohibition is the policy of giving up. Prohibition says we have given up on parents, family, community, church, friends, and the individual to influence one another and decide what is best. Prohibition gives up on medical professionals, removing since 1937 a safe, widely-used medicine. With the Schedule 1 classification in 1970, marijuana has been cut off from research by multiple federal agencies and mounds of red tape. A drug with zero overdose deaths has been deemed too dangerous even to be researched by our scientific community – arguably the best in the world.

McConnell continued the interview to say, “I don’t think an answer to this, honestly, is to go in a direction of legalizing any of these currently illegal drugs. I mean, it just further makes it just like we’re sort of going to give up. This whole, you know, movement in various parts of the country is a big mistake. I mean, you can argue about that if you want to, but the message that goes out when you do that is we don’t really care about this.”

Again, someone who does not care about the issue will default to prohibition. It takes courage to say the government is neither a parent nor a moral compass. In fact, our last three presidents have each admitted to trying illegal drugs. What hypocrisy to be above the law you set for others. Someone who doesn’t care will ignore the evidence that prohibition hasn’t worked. Someone who doesn’t care will answer, no, they don’t believe the war on drugs is working, but, no, they are not willing to rethink policy.

We encourage McConnell as a Senator to respect state marijuana laws and end the Schedule 1 classification of marijuana. For 40 years we’ve pursued a policy that hasn’t worked. It’s time to start trying, not to give up.

This entry was posted in Kentucky and tagged Kentucky, legalization. Comments are currently closed.