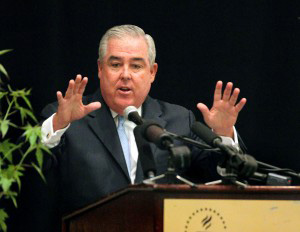 On January 27, 2014 Florida’s Supreme Court ruled in favor of the language for a proposed constitutional amendment that would allow use of medical marijuana in Florida.

Republican Governor Rick Scott is opposed to the amendment and the state’s Attorney General Pam Bondi, also a Republican, had challenged the ballot language, arguing that it was misleading and the requirements too lenient for patients obtaining a medical marijuana card. In a 4-3 Decision, the Florida Supreme Court rejected that argument and cleared the final hurdle for the proposed amendment before it will be presented to voters on the November ballot.

The majority opinion of the court stated:

“The proposed amendment has a logical and natural oneness of purpose — namely, whether Floridians want a provision in the state constitution authorizing the medical use of marijuana, as determined by a licensed Florida physician,” they wrote. “The ballot title and summary fairly inform voters of the chief purpose of the amendment and will not mislead voters, who will be able to cast an intelligent and informed ballot.”

Just a few days earlier, more than 700,000 verified signatures in support of the amendment were approved by the Florida Division of Elections. The group United For Care, funded by attorney John Morgan, was able to collect the necessary signatures before the February 1 deadline. It’s estimated that Morgan has spent upwards of $4 million on the petition drive.

Democratic Gubernatorial Candidate Charlie Crist works for John Morgan and this is where things get really interesting. Charlie Crist was the Republican Governor of Florida from 2007-2011, a Republican State Senator in Florida from 1993-1999, and Florida Attorney General from 2003-2007. Crist declined to run for re-election as Governor and in May, 2009 announced that he would instead run for U.S. Senate. After leading the race for the Republican Primary, he was overtaken in the polls by Marco Rubio. In April 2010, Crist left the Republican Party and became an Independent, losing to Marco Rubio in the general election.

As Governors, both Charlie Crist and Rick Scott have been absolutely terrible when it comes to marijuana policy. Florida has some of the harshest marijuana laws in the country. Possession of only 20 grams or more (less than an ounce) is a Third Degree Felony punishable by up to 5 years in Florida State Prison.

While Charlie Crist supports the medical marijuana amendment, he has a long history of supporting prohibition and opposing any attempt to reduce the criminal penalties. In 2008, Crist opposed reforming the law, as reported by The Miami Herald “Though he has admitted to smoking marijuana, Gov. Charlie Crist said he still favored Florida’s tough drug laws and doesn’t support legislative plans to review whether to lessen penalties for some crimes such as non-violent drug possession.”

In 2008, Crist pushed for and signed into law the Marijuana Grow House Eradication Act (HB173) that includes a maximum sentence of up to 15 years in prison for growing 25 or more plants. Previously, Florida law required at least 300 plants and even the Federal law requires 100 plants or more for a punishment this severe. There are several other disturbing elements to the grow house law. Including the fact that a plant is broadly defined under Florida Statute 893.135 as “a seedling or cutting, is a cannabis plant if it has some readily observable evidence of root formation, such as root hairs.”

Can Floridians trust that Crist will govern any better as a Democrat than he did as a Republican?

Many have speculated that Morgan wants medical marijuana on the ballot to help a Democrat get elected Governor in 2014. I don’t believe this is the case. Medical marijuana initiatives don’t have the same effect of turning out more democratic-leaning voters that a full legalization initiative would have. In addition, many of those voting in favor of medical marijuana in Florida will be Republicans and Libertarians.

John Morgan has explicitly stated that he is not supporting medical marijuana for political reasons and we’ll take him at his word. The issue became personal for Morgan when his father reluctantly tried marijuana while dying from cancer. According to Morgan, his father’s appetite returned, his nausea was gone, and his pain was greatly reduced. Unfortunately, Morgan’s amendment does not allow patients to grow their own cannabis plants. However, I greatly respect John Morgan for supporting the United For Care campaign and successfully getting medical marijuana on the ballot in Florida.

If approved by voters this November, Florida will join 20 other states and the District of Columbia in allowing access to medical marijuana. In order to pass, the measure must garner 60 percent approval from Florida voters. Governor Scott says he plans to vote against it, but would respect the will of the voters. His Democratic challengers for office, including Senator Nan Rich, both support medical marijuana.

The ballot language, which has strong public support in recent polls, reads:

“Allows the medical use of marijuana for individuals with debilitating diseases as determined by a licensed Florida physician.

Allows caregivers to assist patients’ medical use of marijuana.

The Department of Health shall register and regulate centers that produce and distribute marijuana for medical purposes and shall issue identification cards to patients and caregivers.

Applies only to Florida law.

Does not authorize violations of federal law or any non-medical use, possession or production of marijuana.”

Gov. Rick Scott and Attorney General Pam Bondi may very well both be looking for a new job after the 2014 elections. Democrats just might prove to us that supporting marijuana reform is a winning strategy. It’s time for Republicans in Florida to wake up (as many others recently have) and realize that people are sick and tired of the government’s ridiculous prohibition of this plant.

As Republicans, we strongly encourage Floridians to vote in favor of the medical marijuana amendment in Florida this November.