Texas Senator Ted Cruz gave a speech to the Texas Public Policy Foundation on January 10 in which he stated that, of all the “bad stuff” the nation has endured throughout Obama’s tenure, “one of the most dangerous is the consistent pattern of lawlessness from this President and this Administration.”

Using the Dream Act, Obamacare, and marijuana policy as examples, Cruz described how President Obama sets aside the rulebook at his choosing, bypassing Congress to enact his will. Specifically regarding marijuana policy, Obama’s Deputy Attorney General issued a letter to U.S. Attorneys in 50 states in August 2013 directing them to prioritize federal resources toward a set of goals that did not include prosecution of either low-level possessors of marijuana or regulated store fronts in states, namely Colorado and Washington, that have legalized the cultivation and sale of marijuana for recreational use to adults.

Though Senator Cruz makes an important point that Obama could very well bring the debate about marijuana to Congress, and that he would hold enormous sway over his party, RAMP disagrees that the Deputy Attorney General’s directive flouts the criminal law.

If read carefully, the letter states that for the entirety of the ban on marijuana, the federal government has relied on local law enforcement to manage the lion’s share of arrests and prosecution in the enforcement of the Controlled Substances Act of 1970. It lists eight major goals of the Justice Department and states that if it feels the state regulatory system actively prevents these major issues, they will allow the businesses to operate. The goals include:

What we would hope Senator Cruz would say about medical marijuana and marijuana legalization is that the states have passed laws and the federal government should respect those laws. This is not simply a case where President Obama picks and chooses which laws he enforces. The President, with his Justice Department’s unclear guidance, is making business owners, who want to act legitimately, operate in constant fear of a raid that seizes all of their assets.

(The Treasury Department also has the crippling ability to disallow banks—through the threat of massive fines—from accepting marijuana businesses as customers, thereby making them cash-only and highly opaque.)

Other Republicans have come down favorably on the states’ rights issue, however they stand on the legalization of marijuana in their state. Ken Cuccinelli, former Attorney General of Virginia and Republican candidate for Governor, told students at the University of Virginia, “I am personally for a lot of reasons, for the federalism reason…very interested to see how that plays out in Colorado and Washington,” and that, “I’m not at all unhappy they are doing it.” 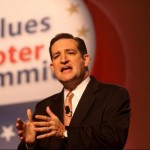 Former Republican Governor of Indiana Mitch Daniels made the powerful statement to National Review, “Without endorsing what they [Colorado and Washington] did, I think they had, under our system, a right to do it…A lot of the worst problems we’ve got in this country, and some of the worst divisions we have, came when the right of citizens in community and in polities, like their state, had those rights usurped by the federal government. And having disagreed with it when it happened on other occasions, I sure wouldn’t call for it here.”

RAMP hopes that Senator Cruz will re-think his stance on marijuana policy and recognize that the un-winnable drug war certainly cannot be waged by the federal government alone. When states weigh in and their citizens overwhelmingly support legalization, Congress and President Obama should listen.

This entry was posted in Uncategorized and tagged federalism, obama, ted cruz. Comments are currently closed.