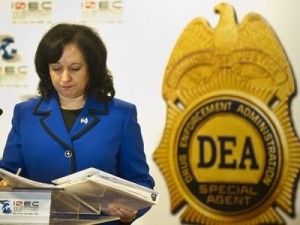 “Kern County, Calif., Sheriff Donny Youngblood, president of the Major Counties Sheriffs’ Association, the group that sponsored Leonhart’s talk Tuesday at its annual meeting in Washington, D.C., said Leonhart called out Obama for what Youngblood described as “irresponsible” comments that were a “big slap in the face” to cops who have lost their lives keeping drugs off the street. “This is a woman who has spent 33 years of her life fighting drug abuse in the DEA, her entire life. To have the president of the United States publicly say marijuana was a bad habit like alcohol was appalling to everyone in that room,” Youngblood said. “I think the way that she felt was that it was a betrayal of what she does for the American people in enforcing our drug laws. … She got a standing ovation.”

Bristol County Sheriff Thomas M. Hodgson said he was thrilled to hear the head of the Drug Enforcement Administration take her boss to task.

“She’s frustrated for the same reasons we are,” Hodgson said. “She said she felt the administration didn’t understand the science enough to make those statements. She was particularly frustrated with the fact that, according to her, the White House participated in a softball game with a pro-legalization group. …But she said her lowest point in 33 years in the DEA was when she learned they’d flown a hemp flag over the Capitol on July 4. The sheriffs were all shocked. This is the first time in 28 years I’ve ever heard anyone in her position be this candid.””

This is a unique event. DEA Administrator Leonhart is not just making general statements about her job, or her stance on marijuana; she is deliberately criticizing her boss, President Obama, for her policy differences with him. Worse, Leonhart’s audience is a group of people that have vested interests in not only drug prohibition but in partnerships with the DEA providing lucrative asset forfeiture and grant revenues for local law enforcement. Leonhart’s seeming aim is to generate political opposition to federal marijuana reform, thereby undercutting the President’s ability to set policy as Chief Executive.

This has important implications. As a political appointee who serves at the pleasure of the President as a law enforcement official, Michele Leonhart has a fundamental duty to obey the law, defend the Constitution, and respect her chain of command. With her speech, Leonhart crossed a figurative Rubicon, where federal law enforcement is willing to deliberately disrespect the office of the President of the United States for political gain.

Such conduct cannot be innocent. Leonhart is a 33-year veteran of the DEA and its politics. There is no middle ground, no gray area, no excuse for this insubordination.

This defiance demands a Presidential response. Without being able to control his own appointees, a President cannot dictate even the most basic policies to his own executive agencies. It is worth noting that this furthermore renders Congress and the votes of American citizens irrelevant as well.

It is essential that the President protect the integrity of his office by immediately firing Michele Leonhart. Moreover, Leonhart’s successor should be someone who fundamentally understands their Constitutional role subordinate to the President and to Congress. And this whole episode should prompt greater scrutiny to whether or not federal prohibition is an appropriate way to manage drugs in America. With marijuana legalization beginning to sweep the nation, the need for this conversation is greater than ever.